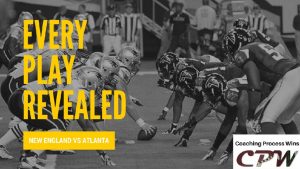 This Course Includes:
Streaming from any device
Lifetime access
100% money back guarantee

Go inside the greatest comeback in Super Bowl history and learn how Tom Brady guided his team to a 25-point second half comeback!

Every single play drawn up and analyzed from a coach’s perspective, diving deep into the coaching adjustments and personnel moves that led to an unbelievable game.

– Why James White had such a huge game against Atlanta
– How Tom Brady uses formations to force the defense to show their hand
– Why one of the biggest plays in the Super Bowl was one you probably missed
– And more!

You won’t find this information anywhere else, so what are you waiting for?

Uncovering the how (and the why) of NFL strategy.

As a writer who spent a period of time coaching high school and college football, Alex Kirby loves talking the X’s and O’s of the game, and prides himself on his ability to simplify the important details of the action without dumbing down his analysis. Many books, including his “Every Play Revealed” series, contain information that you simply can’t find anywhere else.

In his books, Alex writes for the football coach or fan who has already memorized the same cookie-cutter analysis from the pregame shows, and who wants to know more about the details they don’t have time to go into on TV. If you’ve already mastered the basics of the game, but aren’t sure where to go next, these books are a great place to start.

He currently lives and works in Indianapolis, Indiana.