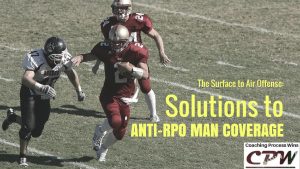 When the defense adjusts to your RPOs, what’s your Plan B?

One of the most popular ways to defend the RPO is for defenses to play straight up man coverage across the board. So what’s your next move?

In this course, Rich Hargitt, the creator of the Surface to Air Offense, takes you through topics including:

– How to beat man coverage

– How to find answers using your base plays

– Moving the pocket to keep the defense off-balance

Rich Hargitt has been a football coach since 1999 and is the creator of the Surface to Air Offense.

He has served as a head football coach and offensive coordinator at the high school level in Illinois, Indiana, North Carolina, and South Carolina.

In 2013, Hargitt helped lead the Ashbrook Greenwave to the second round of NCHSAA AAA playoffs and a 9-4 overall record.  He is currently the Assistant Head Coach/Offensive Coordinator at Eastside HS in Taylors, SC.  In 2015 Hargitt’s offense achieved a statewide Top 10 ranking, averaged 383 yards per game (231 passing, 152 rushing), finished ranked in the Top 10 of the state and Top 5 of AAA in passing, achieved 2nd non-losing season in 13 years.

In 2016 the offense improved even further as the team advanced to the SCHSL AAAA Playoffs.  In addition, the offense averaged 488 yards per game (286 passing, 202 rushing) and 41 points per game in the regular season and finished the season in AAAA ranked 4th in rushing (2,127 yards), 3rd in rushing touchdowns (27), 1st in passing (3,311 yards), 1st in yards passing per game (301), 1st in pass completions (257), 1st in pass attempts (365), 1st in passing touchdowns (37), 1st in completion percentage (70%), 1st in touchdowns scored (65), 1st in scoring (453), 1st in PATs made (53) and 1st in total yardage from scrimmage (5,438 yards).  The offense also led the State of South Carolina in Total Yardage from Scrimmage (5,438 yards).  The 2016 offense also featured a quarterback that completed the 3rd most passes in a game and 3rd most touchdown passes in a single game in state history.  In addition, the offense featured a receiver that the 4th most passes in a single game and 6th most passes in a season in state history.

Since 2011, Hargitt’s teams have amassed 24,816 total yards with 14,698 of those yards coming through the air and 10,118 yards on the ground.   Hargitt resides in Taylors, South Carolina with his wife Lisa and their sons Griffin and Graham.