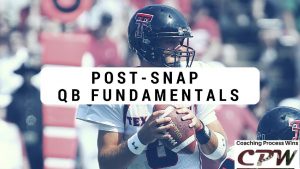 University of Northern Iowa Co-Offensive Coordinator and QB Coach John Bond covers the basics of post-snap fundamentals in this incredible video. Follow along as he shares his unique and time-tested thoughts on things like: – Hand placement under center – The different method he uses to pitch the football in the option game – Creating convincing play fakes – And more! Don’t wait to get better. Book this course now!

John Bond enters his first season as the quarterbacks coach for the UNI football program. He will work primarily with the offense in 2017. Bond, who most recently published his first book “Developing a Championship Quarterback” in 2016, is an active member of the American Football Coaches Association. He has been a speaker at the AFCA Convention three times in his career and is an active keynote speaker at the Glazier Football Clinic. He has also been heavily involved in the NFL, speaking at two Atlanta Falcon Clinics and serving as an instructor at the Manning Quarterback Camp. Bond, who has over 30 years of coaching experience under his belt, comes to UNI after spending two seasons with Tennessee-Martin as the offensive coordinator and quarterbacks coach. In 2015, Bond coached an offense that finished the season ranked No. 15 in the country in total offense, also helping his starting quarterback to a No. 5 ranking nationally in five different statistical categories. He was the offensive coordinator at Georgia State from 2008-12 following a stint at Georgia Institute of Technology in 2007. At Georgia Tech, he served as the offensive coordinator with the offense leading the ACC in rushing yards on the way to a Humanitarian Bowl appearance. Prior to his time in Georgia, Bond was heading the offense at Northern Illinois from 2004-06. In 2004, he was at the helm to see the Husky offense finish 13th in the country in scoring offense, leading them to a MAC Western Division Co-Championship and to the Silicon Valley Bowl win. In 2005, he coached the only quarterback in Division I football to have a 70-percent completion percentage along with back-to-back MAC Western Division Championships. In 2006, he coached the Husky offense to a Poinsettia Bowl appearance along with the nation’s leading rusher. Bond served as the offensive coordinator and quarterbacks coach at the United States Military Academy from 2000-2003, earning the Mike Campbell Top Assistant Coach award by the All-American Football Foundation in 2003, also helping his team to breaking 35 offensive records that season. Bond is familiar with the Missouri Valley Football Conference, also coaching at Illinois State from 1996-99 as its offensive coordinator and quarterbacks coach from 1997-99 and their academic liaison and wide receivers coach in 1996. During his time in Normal, Ill., he led the offense to break over 50 school records and to two FCS playoff appearances, including a semifinal appearance in 1999. He was a finalist for the AFCA National Assistant Coach of the Year in 1999 with the Redbirds winning the Gateway Conference Championship. Before he started in the MVFC, Bond coached at Delta State from 1994-95 as the passing game coordinator and the quarterbacks coach, also spending three seasons at Texas-El Paso from 1991-93 as the quarterbacks coach. He got his coaching start at Southwest Missouri State from 1986-1990. He was the running backs coach and recruiting coordinator during his time at Southwest Missouri State. He led his team to two FCS playoff appearances along with Gateway Conference Championships in 1989 and 1990. Bond is a graduate of the University of Arkansas, receiving his B.S. in physical education.